Grammar
» Positioning in Relation to Something Else

There are a series of roots that can be used to describe the positioning of a person or object in relation to someone or something else. These roots vary from dialect to dialect.

The roots above can be used to describe the space around a person or an object using a possessive noun ending:

These nouns can be used to describe where something is happening:

It is also possible to add a verb affix to the position names.

saninniittuq
It is beside me.

tunungniittuuk
The two of them are behind you.

qulaaniittut
They are above her.

saanniittuq
It is in front of me.

qaanganniittut
They are on top of it.

iluanniituuk
The two of them are inside it.

tunungnuaqtut
They (3+) went behind you.

saattinnuaqtuuk
The two of them went in front of us.

qulinninngaaqtuq
It came from above me.

tunungninngaaqtut
They came from behind you.

Naming the person or object

If the person or object that is the reference point is named and is
singular (there is only one of them), that word takes the ending –up: 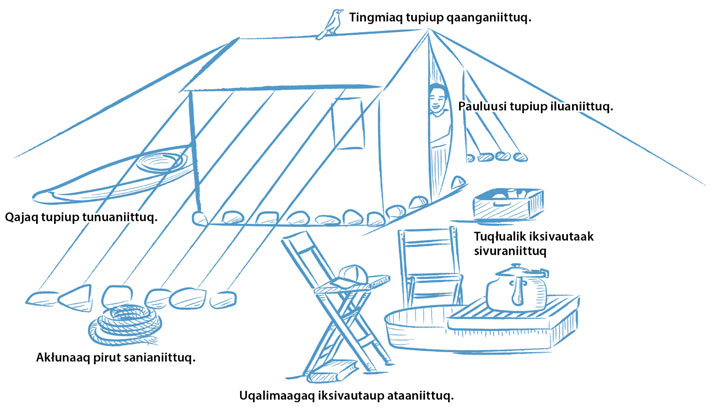 qaa–
on top of

qaanganiittuq
It is on top of it.

ataaniittuq
It is under it.

If the people or objects that are the reference point are in the dual or
plural, the word does not take the –up ending.