This chapter deals with verbs, or words that describe actions, events or states of being:

taqajusik
You two are tired.

Inuktut verbs always have a root and a verb ending:

One or more affixes can appear between a root and the verb ending:

All verb endings give two types of information:

The third person endings do not differentiate between he/she/it:

For example, the -tuq ending tupaktuq could refer to a male (he), a female (she) or an animal (it).

Most verb endings change their forms depending on the last letter of the root they are added to.

Other endings have different forms for roots ending in a vowel, –q, –k or –t:

There are different sets of verb endings depending on the function of the verb in the sentence. Different endings are used to make statements, ask questions, or tell someone to do something:

The most common verb functions and their endings are covered below.

These endings are used for making simple statements about events.

Statement endings generally begin with j when added to a stem ending in a vowel.

The j changes to a t when the ending is added to a stem ending in a consonant:

There are however alternate forms of these statement endings that are frequently used when responding directly to a question. In these instances, the first letter of the ending begins with v after a vowel and with p after a consonant:

Niriliqpit?
Are you eating right now?

ii, nirisimavunga
Yes, I have eaten.

ii, niriliqpunga
Yes, I am eating.

There is a set of endings attached to verb roots for asking questions:

Niuvirvingmut maligumavit?
Do you want to come along to the store?

There is a related set of endings for asking if something is not happening. These endings are added to the negative affix –nngit:

Anijjaanngilagut?
Are we not going out?

Suli atuinnaunngilaq?
Is it still not ready?

These verb endings are used for telling someone to do something or for suggesting something that you would like to happen. They fall into three groups:

(i) Commands where the action will be performed by the person/people one is speaking to:

Utaqqigit!
Wait! (command to one person)

Utiritti!
Come back! (command to 3+ people)

Qaijjuk!
Give it to me! (command to 1 person)

(ii) Commands where the action will be performed by the person who is speaking:

Atulaukaglaakkak!
Let me use the two of them for a bit!

(iii) Commands where the action will be performed by a third party:

Ingillit!
Let them sit down!

This set of endings is used to mark a verb as an explanation or a circumstance of some other statement.
A verb with one of these endings indicates either:

(i) the reason another event occurred:

(ii) when an event happened in the past:

In the third person, where he, she, it or they is performing the action there are two sets of endings:

Aanniaramik anilaunngittuuk.
The two of them didn’t go out because they were sick.

Qiturngangik aanniarmatik anilaungittuuk.
The two of them didn’t go out because their children are sick.

This distinction is similar to the noun endings described in section 4.2 (his versus his own).

A verb with one of these endings either:

(i) sets conditions that have to be met for another event to happen:

Sila piukpat nunivalaaqtugut.
If the weather is good, we will be berry picking.

(ii) describes when events will happen in the future:

Tikikkuvit aijaulaaqtutit.
You will be picked up when you arrive.

The if/when endings also have two forms depending on whether the two actions will be performed by the same person on by different people:

These endings join an event with another event happening at the same time:

The basic form of these endings is used when the related actions are being performed by the same person or people, either in the present or in the past.

If the two actions that are linked are performed by different people, the prefix ti– is added before the ending:

Pisuglunga iqalliarvingmuarniaqtunga.
I will go to the fishing spot by foot.

The future form of these endings can also be used as a less direct and more polite way of telling someone to do something:

There is a related set of endings that indicate that something was not happening while another event was taking place:

These endings can also be used to tell someone not to do something: 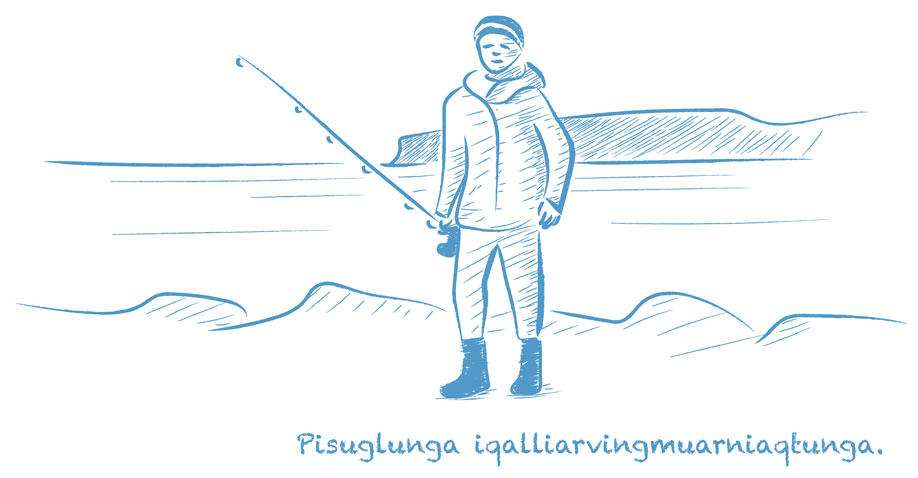